Australia  always conjured  an impression in my mind of a far away , magical land  tucked  in the midst of the infinite ocean in the southern hemisphere. Truly,  I was quite bowled over  on my visit to this intriguing country . Austrailia, (East coast comprising Sydney and Melbourne)  was  the unanimous choice for our Christmas and New year vacation !!  Sunshine, a crisp weather,  pristine, calm beaches,  bountiful of rare animals , like kangaroo and koala, and warm people is what Austrailia  comprises . A comfortable travelling experience and spell binding spots ,  made our trip  fulfilling !  Austrailia is also one of the easiest places to get around as it is  less crowded  than other countries  and has a  controlled traffic system. 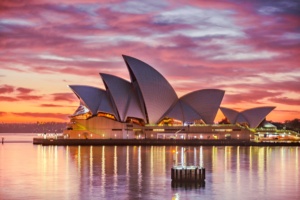 What  catches  your attention on first  arriving in  Sydney is the magnanimous Opera House!  This iconic, pearly white structure is  visible from the plane while landing and is worth a visit. Opt for their guided group tours,  or opera/theatre  enthusiasts can choose from the plethora of shows held here and watch their favourite show . Tickets for the guided tour have to  be booked in advance.  The  tour  essentially takes a peek into  the history and architecture of the structure, the systems and processes behind the scene.

Another famous landmark in Sydney is the magnificient Harbour Bridge. A unique feature of this bridge, that distinguishes it  from other such bridges is that tourists can actually climb on the bridge and reach the pinnacle   to get sweeping views across Sydney. We thanked our lucky stars, for being in Sydney  during  New Year time, as we got an opportunity  to witness the spectacular firework show on New Year’s  eve. The show was simply mindblowing . Though the surging crowds can become quite overwhelming,  It is advisable to block your places in advance.

Syney Eye ,  the 1000 feet high viewing deck ,  is the tallest tower in Sydney and the second tallest in the southern hemisphere.  It is a marvellous wonder  –  enables tourists  to have  a bird’s eye view of the stunning vistas ,  get pictures clicked and enjoy  the 4 D movie shown  here.

We arrived into Melbourne, on a gorgeous moon-lit evening, with  the gigantic silver ball perched on an orangish hued sky , rendering a mystical aura to the entire place. Our huge,  swanky suit on the twenty third floor at our abode for the next  four days, the  luxurious Crowne Metropol hotel had full glass bay windows, giving a panoramic 360 degree  view of the city around.  ! Being Christmas time, the  festive fervour, stupendous decor, mammoth Xmas tree and Christmas carols playing everywhere   uplifted our spirits.

Melbourne Cricket Ground  – holds  the record of being the  largest,  premium  cricket stadium in the world. It  is an awesome place worth visiting , specially for cricket lovers. Free  guided group tours take tourists around the whole complex to have a glimpse of  all the vantage points therein and the silky, smooth, well maintained  turf . Lastly, before leaving it is recommended to visit the  sports museum in the vicinity of the `MCG’  as it is known as . It was a satisfying experience,  though Melbourne weather can become quite hot and sultry.

Similiar, to the Sydney Eye, Melbourne too has a viewing deck –  Eureka, which reaches a dizzying height upto the 78th floor. Everthing on the ground below, looking  like minitiatures from above.

Melbourne has a host of other attractions, it is the easiest places to get around, with warm hearted,  helpful  locals ! Cherish a leisure  ride on the giant wheel known as the Melbourne Star, or simply stroll  on the streets, admiring the colourful graffiti on the walls, or find peace  in a quaint  cathedral, seeking divine bliss.